Piper, six-and-a-half kilos of ex-feral tom, has a bird problem. He’s been stalking swallows, by hanging out close to a nest, and now the swallows are fighting back. Poor Piper got spooked and abandoned the hunt when they started dive-bombing his ears. Now he just runs for cover. It was very funny, until the little feathered devils started doing it to me.
The nest (one of many around the farm) is tucked up under the eaves of the old stables, just outside the door of the old tack room where we keep the geese over night. Before the eggs hatched, I would get the sudden flick and flap above my head every time I walked underneath and a swallow took off, nought to whatever crazy speed they reach in seconds. Now that they have hatched, the parents zoom in, feed and zoom back out. 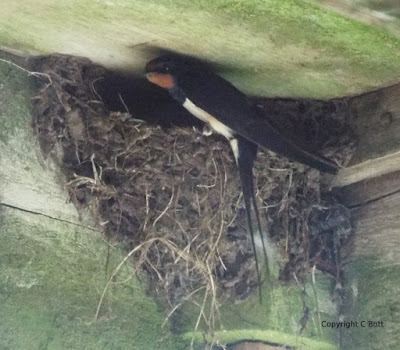 They are busy little birds – we have photos from about two weeks back, taken from inside the tack room. The parents came in and attended to the lone, wide beak just poking up above the edge of the nest. Back then they lingered long enough to get pictures. A week ago there was no time to waste – in and gone again in two or three seconds. 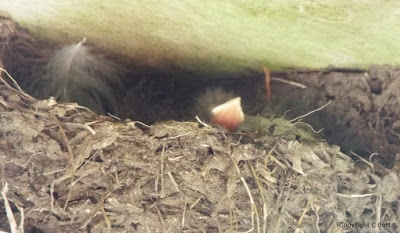 The pattern is relentless. In, feed, out – unless I’m too close.
I’ve watched the incoming flight pattern. The adult bird comes in from the field, straight along the yard, turns sharply a quarter of the way along, takes a long loop over the house, and then ducks under the stable block eaves and into the nest. However, if I happen to be standing near the nest location, they keep doing that lazy loop over the house, coming back, turning again just above my head. Every one of those jinks is a sharp snap by my ear and a furious cheep, before they race off for another run.
As I said, it was very funny when it happened to Piper, but I’m not laughing now. It’s like someone clapping in my ear every five seconds, accompanied by shrill screams of outrage.
That one lone beak was also misleading – it just happened to be the only one visible. The current best estimate, now that the youngsters are bigger, is four, and as they grow the adults are getting more aggressive in explaining to me that this is their patch now. It’s understandable, I suppose – two busy parents, stressed out by the price of grubs and insects these days, and four beaks to feed.
Last week, I just happened to pause in the stableyard, staring out over the field beyond, and a swallow came in just over the gate, aiming for me at face-level. It did miss me, flicking aside at the last moment, but it all happened so fast that I had no time to duck. I don’t know how fast a swallow flies (African or European) but it covered the five meters from the gate in a blink. Looking at the nest, I’m sure the pressure is really on now – those youngsters are getting big, their down almost entirely replaced with feathers, so the big day must be coming and the food demands reaching a peak.
The harassment is also multiplied. At times there were at least four adult swallows strafing the yard and I suspect that some of these are stroppy teenagers from an earlier hatching. We know that there’s been at least one previous set this year, because they built the nest in the rafters of the corner box where the chickens hang out. We had to leave the door open until after dark so that the swallows could finish their day’s feeding. 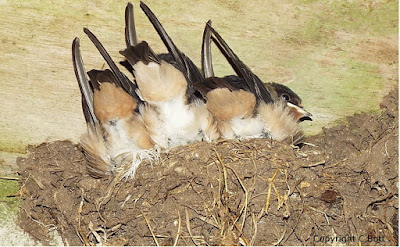 It’s not just Piper and myself getting harassed. My partner saw a half dozen swallows mobbing a buzzard until it retreated, and more recently a falcon coming in low and fast across the paddock, chased into the tree-line by three swallows on its tail.
Now the yard can return to peace and quiet. Over the last few days, the number of chicks visible in the nest has dropped. It’s tricky to keep count as all we can go by is the beaks or tails sticking out over the edge of the nest. As of yesterday, we are pretty sure that the last of them has finally flown the nest. 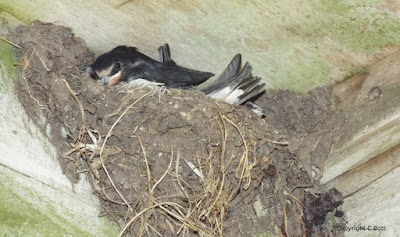 However, according to Google, there’s time for them to raise another batch before the autumn migration.
Gulp.